Update January 2014: This was written prior to Flash being updated to work as a Pepper plug-in and Chrome adding audio indicators; Chrome now will visually indicate which tab(s) are playing sound. (But it can be hard to see indicators when many tabs are open or when they come from another window and it doesn't have mute/pause/stop commands.)


A: MuteTab is a Chrome extension that helps you manage the sound coming from tabs in Google Chrome. It helps you to find which tab(s) are making sounds and provides browser-wide management of tab muting, including automatically muting all background tabs. It does its best to allow this while working around weaknesses in Chrome and some plug-in implementations (most notably Adobe Flash).


Q: How does it work (ignoring the weaknesses and the working around them for now)?


A: All sounds in modern browsers such as Chrome are made by plug-ins such as Flash, Silverlight, QuickTime, etc. (expressed in HTML as <object> or <embed>), Java applets (<applet>), or HTML5 audio/video (<audio>, <video>). The extension scans open webpages for these tags and collects a centralized list of the found sound source tags.

A user can see this list by clicking on the MuteTab extension icon. 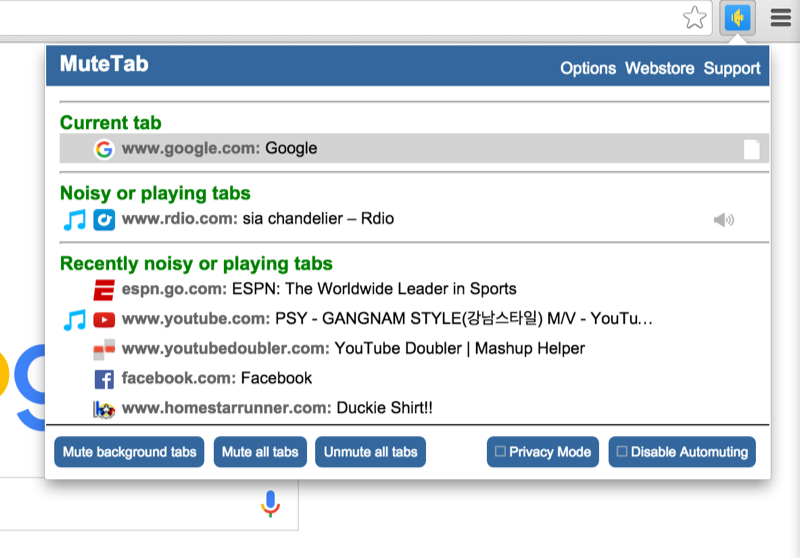 There, they are presented with icons that can mute (individually or collectively) many sound sources.

A similar menu is shown by right clicking within the webpage and clicking on the MuteTab context menu.

A user can also configure the extension to automatically mute all tabs but the current one as they browse to reduce the time spent tracking down a sound.


Q: What are these plug-in weaknesses?


A: There are two issues that make controlling sound in the browser more complicated than it needs to be:

These issues come about because Google Chrome (and I believe all browsers other than Internet Explorer that support plug-ins) runs a shared instance of plug-ins for all open tabs/windows and some plug-ins (most notably Flash) do not provide a generic ability to mute individual instances. This extension provides work arounds for this issue which results in sound management tasks being a little more complicated and sometimes impossible.


Q: How does MuteTab work around not being able to tell when audio sources make sound or if they ever do?


A: Instead of showing audio sources, MuteTab shows possible audio sources. This means that tabs that show up in the extension popup only _might_ play sound and only _might_ be playing sound at the moment. As a result, the list will include false positives (i.e. tabs are listed because they might make sound yet they do not). The number of false positives can be reduced by running AdBlock or AdBlock Plus to strip out ads.


Q: Are there any sound sources that MuteTab cannot detect?


A: Unfortunately, yes. Websites (typically HTML5 games) that make sound using the web audio JavaScript API, which was released around the time when MuteTab came out, are not detectable. Neither are sounds coming from plug-ins in blocked popup windows. (Chrome doesn't allow extensions to access those pages). Also, sound sources that come from same-domain iframes are not detected, although this may be possible with more development effort.


Q: How does MuteTab work around not everything that can make sound being mutable?


A: Despite its name, MuteTab never literally mutes anything. For YouTube, HTML5 video/audio, and QuickTime, MuteTab will pause it. For everything else MuteTab only allows you to 'Stop' it, which means that if you ever 'Restore' it, it will likely restart at the beginning. This unfortunately means that MuteTab does not universally allow you to mute a game while you listen to your background music in another tab. Some Flash files do restore pretty well, though, (such as videos at hulu.com) so stopping can occasionally work okay.

Q: How do I install the extension?


A: See the instructions in the user documentation


Q: Why does Facebook show up as possible sound sources?


A: Its chat client will make a sound when you receive a message.


Q: Why do some YouTube and QuickTime videos flicker on load?


A: To allow the user to pause the videos, it is sometimes necessary to modify the HTML to allow local scripting. The flicker happens because it was empirically discovered that doing a Stop and then a Restore on load was necessary to apply the new HTML. If this flickering causes problems, you can turn it off in Options (but that means that some YouTube videos will only let you stop and not pause them.)

Q: What is 'mutetabid?' in the audio source description?


A: For some potential audio sources, it is unclear as to what to call them in the UI, so the IDs assigned by MuteTab get used.


Q: How do I customize the appearance of MuteTab?


A: As of MuteTab v2.0, the UI is now CSS driven. If you find the MuteTab folder within the extensions directory, modify mutetab.css to change the CSS and change the images inside the popup/ folder. You should make a backup of any changes you made in case the extension gets updated. Also, if you have a cool design that you think is better than the default one, get in touch with the MuteTab developer at mutetabextension at gmail.com with at least a screenshot (or better yet, the CSS and new images) if you would like it to be considered as the new default.

Q: I'm playing a Flash game but it doesn't have a mute button. Is there an extension that will let me play it muted while I listen to background music / video coming from another tab?


A: Unfortunately, no. I spent some time looking into solving this problem but it likely requires action on Adobe's part or an unlikely major redesign of how Chrome runs plugins.

The best workaround for this problem seems to be run one Flash file in Chrome and the other in FireFox/IE/Safari/Opera. Or open them both in Internet Explorer. You can then control the volume for each process separately, in different ways depending on the operating system. (For Vista and higher, you can double click on the volume icon in the system tray to launch the mixer (also, someone sells a product that will do this for Windows XP); an entry will be shown for each process allowing you to modify its volume. For Macs, Audio Hijack Pro and a few other for pay/trial applications can do this.)


Q: Is there an extension that blocks certain plug-in instances completely?


A: Use AdBlock or AdBlock Plus.


Q: Is there an extension that prevent tabs from making sound until the user requests it?


A: Yes, there are several. There is Stop AutoPlay, FlashBlock, NotScripts and also the built-in Chrome 'click to play' feature. If also using this extension, FlashBlock is preferred since sound sources blocked by it will be shown as (blocked).

Note that while many people rely on these extensions to solve their sound control needs, these extensions can't help you find a tab after you unblocked it and allowed it to run in the background.


Q: Is there an extension that mutes all Flash browser-wide (without blocking)?


A: The Google Chrome ToolBox does this but only for Vista and newer versions of Windows.

You can also do this by changing the volume for the entire Chrome process (via the Sound Mixer in recent versions of Windows and Audio Hijack for Macs.)


Q: Is there an extension that allows controlling the volume of different tabs?


A: No. But perhaps a future version of this extension will support it (although it would only work for sound sources that have JavaScript APIs).


Do you have another question or have feedback on a provided answer? Send feedback to mutetabextension at gmail.com